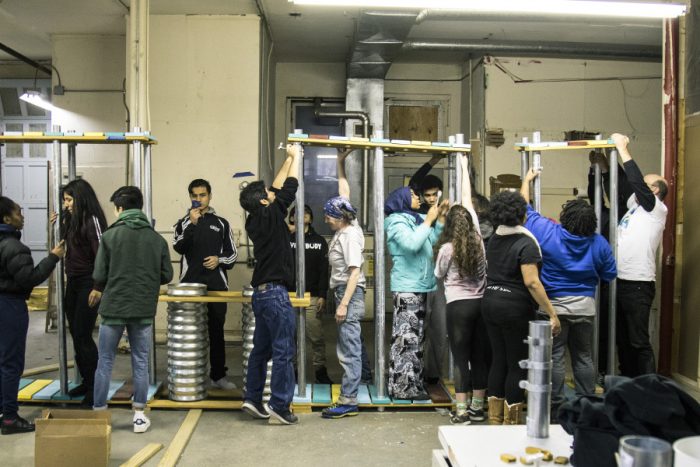 In January 2019 the Chicago Department of Cultural Affairs and Special Events released a new softcover, Art In Chicago Neighborhoods, edited by Tricia Van Eck, 6018North, co-edited by Iker Gil to celebrate the work created by artists for the city during Chicago’s Year of Public Art 2017.

The book is a rich tapestry of public art works and essays, with a long section devoted to the 50×50 Neighborhood Arts program, 50 new works commissioned for 50 wards. The section includes detailed photos, an augmented reality interface, and short essays on each of the projects. We highly recommend the book. Check your Alderman’s office for a copy.

As a teaser, Van Eck shared the original longer version of the essay about Territory’s 50×50 project, “Bridging the Distance” for the 33rd Ward. The featured photo is by Ji Yang.

Bridging the Distance is a “People’s Spot” which refers to the converting of park­ing spots into social spaces for people to gather and interact, created by through the Chicago’s Department of Transportation Make Way for People program.

Territory is a studio program for teens to practice urban design, public art, and community planning. Architect, artist, and director of Territory Helen Slade led After School Matters teens to organize community engagement events and cre­ate the project’s schematic design and design development. After three pop-up community events, the team focused their design on the concepts of play, hang­ing with friends, meeting a stranger, and chilling. In summer 2017, design-build interns drew construction plans for permit. The North River Commission in Albany Park assisted with the project’s management and installation.

In September 2017 over 15 volunteers helped to cut, drill, stain, and paint the modules. The modular design, made of simple materials—wood decking painted green, white, red, and yellow; chain-link fence posts; and fence hardware—is easy to assemble, move, and reconfigure at different sites throughout the neigh­borhood. In December 2017, the team assembled the modules indoors as a test run, to ensure the success of the project’s public debut for neighbors to meet and relax.